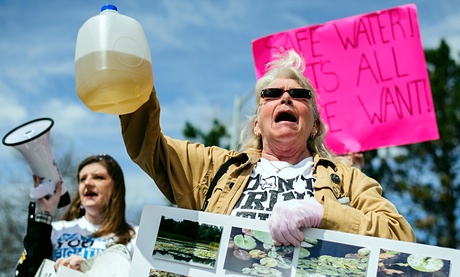 A couple weeks ago, I wrote about how disaster response and the concept of a snow day have social justice implications. This week, I am continuing the trend by looking at the disaster in Flint, Michigan. Many news outlets are examining the crisis from a “so how do we fix it” standpoint, but I want to look at this crisis through the lens of “how did we get here.” What structural imbalances led us to this point? What does this crisis say about the bigger picture? Before we get there, though, let’s look at what happened:

In 2011, former acting mayor of Flint, Michigan Mike Brown was appointed by Michigan Governor Rick Snyder as the city’s Emergency Financial Manager. The city was $15 million in debt, and it was the EFM’s job to cut the budget as much as possible to remedy the situation. As a major cost saving measure, Flint voted to stop buying water from Detroit, which pulls water from Lake Huron, and connect to Karegnondi Water Authority as a cheaper, more direct way of getting water from Lake Huron. This plan, voted on in 2013, would not be completed until 2016 and the city switched to water from the Flint River in the interim. Tests done on Flint River back in 2011 showed that the water from the river was corrosive and would need to be treated with phosphates before it could be used as a water source. This information was sent to the Michigan Department of Environmental Quality in 2013 when the decision was made to switch. It was the MDEQ’s job to address the corrosiveness of the water, which would cost about $100 per day. As a cost saving measure, they didn’t.

Fast forward to April 2014. Flint switches its water source. Residents report that the water is brown, smells, and has a bad taste. It was gross, but officials insisted it was fine.

That summer, E.coli and coliform bacteria were found in the water and residents were told to boil their water. Still gross, but officials still claimed the water was safe to drink. Residents continued to report nasty water which was now causing rashes and illness across the city. In January of 2015, Detroit offered to reconnect Flint to Detroit municipal water and wave the reconnection fee. City officials declined and again insisted the water was safe.

Meanwhile, the GM plant near Flint stopped using the water, citing issues with corrosion of metal parts. Since April 2014, this same corrosion had been eating away at the zinc coating on the inside of lead pipes, allowing lead to leach into Flint’s water supply.

You probably know the rest of the story. There was cover-up after cover-up.

Kids showing signs of lead poisoning were tested. The water was tested. The city switched back to Detroit’s municipal water, but it was too late. The lead was exposed and continues to leach into the water today. Flint is currently in a state of emergency, with all of its residents using bottled water to do everything from cooking to bathing to brushing teeth.

There’s a lot of stuff going on here. This timeline (and this one) and these few articles can help you get up-to-date on the facts and the finger-pointing. But, I want to focus on the residents of Flint and ask the question, How on earth did this happen?

Flint, like many parts of Michigan, was hit hard by the collapse of the automotive industry in 2009. Today, 40% of its residents are below the poverty line and 57% are black. Most are blue collar workers and the median value of owner-occupied homes is just $41,700. So, one has to wonder: Would this have happened in a white suburb? Would it have taken over a year for officials to respond? Historically, the answer is no.

It’s important to understand that the Flint disaster isn’t just the result of negligence. City officials made a conscious decision to pump corrosive, notoriously contaminated water into the homes of its residents. They also made a conscious decision to not properly treat the water. Once things got really bad, city officials did everything they could to cover it up. Flint residents are calling for answers and solutions, all while trying to survive on one case of bottled water per day.

Access to clean water is a human right. We literally cannot live without it. But, time and again poor people and people of color are denied this human right in the US. Just this last summer, water was shut off for 3,000 households in Detroit because of past-due accounts. Thousands more are at risk for losing their water– in fact, 40% of Detroit, 120,000 accounts and about 300,000 people, have outstanding water bills at an average of $755 per household. Detroit Water Brigade is one of many non-profits working to stop the shutoffs and implement a water affordability program.

Water shutoffs in Detroit and contaminated water in Flint have two important things in common: high rates of poverty and high proportions of black residents. It is no coincidence that both of these human rights violations occurred in areas of high rates of poverty and majority black population. When you consistently demonize, criminalize, and disinvest in poor or black people and black communities, a clear message is sent both to civilian constituents and city officials: these people aren’t worth our time and money and they don’t care anyway. That’s what Flint city and Michigan state officials conveyed to Flint residents and, eventually, the entire country.

The thing is, the people of Flint do care. Lee Ann Walters is the mother of four who blew the whistle on the whole issue. It was because of her and a report from the EPA that was leaked to her that the national media began to pay attention to the issue. She organized residents for town hall meetings with city officials on numerous occasions, only to be met with dismissals and the same story about how the water was safe. In this viral video, she explains another issue with the water: she’s still being billed for it. If you can’t pay for your water, they shut it off. If you have no water, Child Protective Services get called in to remove your children from an “unfit” and “unsanitary” home. After 90 days of not paying the water bill, they cap your sewer which can lead to having your house condemned. There’s already a stigma on poor families and single parent households, especially single mothers. We call them unfit, or suggest they don’t care about their children. They are assumed to be less educated and less concerned about health issues, and now the stigma has played into how this whole thing went down: not only have classist and sexist assumptions allowed officials to dismiss local concerns for months, but they can also cause families to be uprooted or become homeless. This is what makes this issue not only a human rights issue but a social justice and feminist issue.

The residents of Flint deserve justice. Sure, officials need to be held accountable for their actions but what Flint needs right now is water. Flint needs investment. Flint needs new pipes and more jobs and better access to healthcare and government assistance programs. Flint needs schools and teachers equipped to meet the needs of the hundreds of children who have been affected by lead poisoning. Activist Michael Moore has written an open letter expressing his anger and calling for accountability and revolution. Whether or not you agree with him, it’s clear that this is a social justice issue. And, if we claim intersectional feminism as a value and practice, this is an issue feminists need to rally around as well.

Understanding how structures of poverty, racism, and sexism set this problem up (and inform what happens next) can help activists, policy makers, and leaders keep this kind of thing from ever happening again. It can also help us answer these questions: Why didn’t it become an issue sooner? Who matters — and who doesn’t? Where else in this country are people in crisis without a voice? What will it take to get us to notice? Will we be too late?

If you want to do more to help flint, check out the Flint Water Response Team website or this article listing different areas in need of donations. The Flint water crisis didn’t become widely known and publicized until fairly recently and the EPA is still not happy with how the recovery is going. Spreading the word, sending water, and putting pressure on officials is crucial in the short term, but Flint has a long, long expensive road ahead.