Autumn is a senior Meyerhoff Scholar (M29), pursuing a BS in Chemistry and a BA in Gender, Women and Sexuality Studies dual degree, a member of the Honors College and currently a student staff member at the Women’s Center.

I need to make a disclaimer! I think that it is important to know from the forefront that I am both a STEM student and a humanities student, but the primary focus of my career will be in STEM. Here at UMBC I am pursuing both a BS in Chemistry and a BA in Gender, Women’s, + Sexuality Studies (GWST), and I am a Meyerhoff Scholar so it puts me in a bit of an interesting and unique place to write this blog post critiquing the institution of STEM (by STEM, I am referring to the collection of established scientists that shape the major trajectory of the larger infrastructure of research) from a critical humanitarian perspective because I have a foot on both sides of the channel separating science from humanities and humanities from science. I firmly believe that institutions need to be constantly critiqued and changed in order to remain effective at generating knowledge and not stagnant. After graduation, I plan on pursuing a PhD in a chemistry related field and a career in STEM research, but it is extremely important to me that i do not abandon the framework of thought that I developed within my GWST studies.

Just focusing on UMBC, it is pretty clear to me that our school heavily values its science, technology, engineering and math (STEM) students. A recent editorial in The Retriever detailed the large inequity in funding and resources between UMBC’s STEM programs and UMBC’s non-STEM programs. Just going by raw money, “The College of Arts, Humanities and Social Science (CAHSS) total budget was $39,796,930” compared to “the Engineering and Information Technology and Natural and Mathematical Sciences [Colleges] (COEIT and CNMS respectively) had a total combined budget of $46,064,518,” the editorial goes on to say that the differences in budgeting do not reflect the number of majors offered by COEIT/CNMS and CAHSS. the problem with undervaluing arts and humanities in favor of valuing STEM research and institutions isn’t a problem that is isolated to UMBC or the University System of Maryland’s budgeting process. 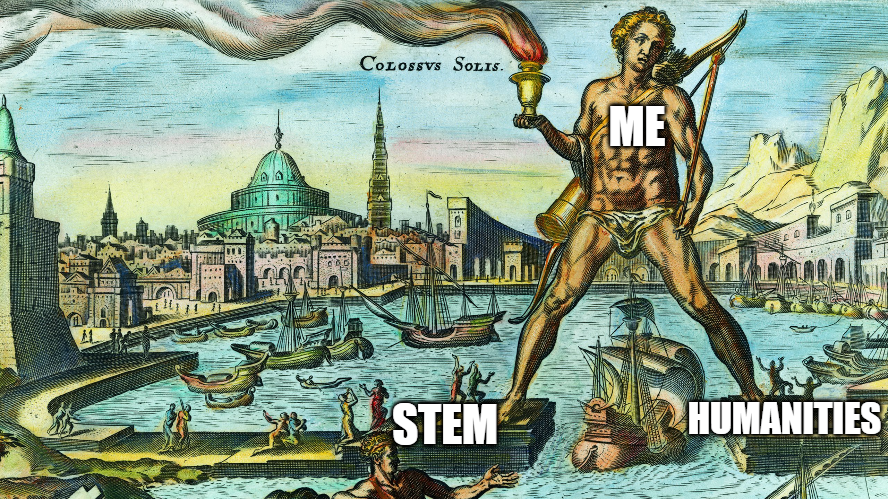 Image Description: This historical engraving, which depicts a large statue of a man straddling an entryway to a harbor, of what artist Martin Heemskerck believed the Colossus of Rhodes looked like with the superimposed text reading “STEM” on one side of the entrance, “HUMANITIES” on the other, and “ME” on top of the statue itself.

This budgetary discrepancy between STEM and non-STEM fields is indicative of a larger problem within society and STEM in general, where science is valued at a higher level than arts and humanities. This disparity gives rise to attitudes of STEM elitism within the science communities.

One of the most pervasive effects of this STEM elitism is the self-imposed isolated mindset. STEM often believes that it is on its own quarantined island, insulated from politics, social issues, and personal biases. The common belief is that STEM research is pure, factual, and just an analysis of how physical phenomena interact with each other. STEM is growing bacteria cultures or doing an electrochemical experiment and just being focused on the chemistry behind it. I mean, how can these bacteria or this newly synthesized compound be impacted by humanities or social science research?

This concept is unique amongst the STEM fields as other fields such as social sciences or humanities are often required by the nature of their research to account for and adjust on behalf of external and internal biases. However, STEM research, despite popular belief, is not immune to these biases. What can STEM learn from the humanities in terms of addressing these issues?

The Notion of STEM Superiority

At UMBC, STEM students are somewhat isolated from the rest of the campus. Whether it is by the student’s own choice or just the actualized reality of their academic career, STEM students usually have to go out of their way to meaningfully interact with non-STEM students. This is, of course, due to the nature of STEM classes being extremely regimented, time intensive, and exclusive. Granted, every single major will separate as the classes become more specialized and start requiring more prerequisites to take, but the extent to which STEM classes separate is not the same as within humanities classes such as GWST courses. For example, many upper level GWST courses only require one or two prerequisite courses to take. For instance, I can take Queer Theory, a 400-level course that is crosslisted as a graduate level course within the GWST department here at UMBC after only taking one prerequisite class (Intro to Critical Sexuality Studies, a 200-level class). This is compared to a 400-level CHEM course, Inorganic Chemistry, which requires more than four prerequisite classes that take over two years to complete following the normal and recommended 4-year plan.

I think one of the fundamental and one of the most pervasive beliefs surrounding the concepts of “STEM Superiority,” can stem from the fine distinctions between the research environments. STEM research focuses primarily on discovering knowledge pertaining to how the natural world exists, and to explain why natural phenomena happen and how they interact with each other. On the other hand, humanities research details how humans react to the world, and how humans interact with each other. Some scientists believe  that because they are studying the fundamental phenomenon of the universe, the social sciences and potential impacts of human biases play no role in their research. At first glance, this might seem like a reasonable understanding of the situation because bacteria, solutions and spectrophotometers aren’t human and cannot be discriminated against! On the surface, this may be true but there are very significant factors that scientists should consider while doing their research. Scientists are human, and therefore have human biases, opinions and prejudices, whether they are well defined or not. Nobody can truly live an apolitical existence, and that includes scientists.

Who is Doing the Research?

These biases, opinions and prejudices can have an impact on the so-called “impartial research” of the scientist. One of the most obvious forms can be analyzed by asking “who is doing the research?” The vast majority of researchers are male, white, and were educated in Western Countries. This can be seen extremely clearly in the breakdown of Nobel Prize winners. As of 2020, no Black scientists have won the Nobel Prize in Physics, Chemistry or in Physiology or Medicine, and only five women have won the prize in Physics (2.2%), nine in Chemistry (4.7%) and twelve in Physiology or Medicine (5.4%). While the demographics of the recipients of the Nobel Prize are not the most representative study of diversity within STEM (or a good signifier of the diversity in STEM because it is a cherry picking of the scientists with the “most significant” research) further evidence of the imbalance within STEM can be signified by the existence of both the Meyerhoff Scholars and Center for Women in Technology (CWIT) Scholars programs at UMBC, with both programs’ main goals being to increase the diversity of underrepresented minorities in STEM. Even within UMBC where the overall student body is composed of 52.1% racial minorities, only 29.1% of our faculty are a part of racial minorities.

The lack of diversity can probably, at least, be blamed for the long, storied history of severe ethical breaches. From the Tuskegee Syphilis Study, where the Public Health Service non-consensually experimented on Black men by infecting them with syphilis and subsequently refusing to treat their symptoms all in the name of science, or the continued use of Henrietta Lacks’s cervical cancer cells without proper consent of the Lacks or the Lacks estate to the use them in medical research, science sometimes fails to address how real people are affected by the research that is performed. A lot of research is innocuous and will never affect the layman, but these potential ethical violations are not just historical. Even now, the eugenics implications of being able to selectively edit genes through CRISPR-CAS9 are being hotly debated, especially since two of the major scientists behind finding the enzymes just received the Nobel Prize in Chemistry! Further discussion also needs to be had about the gross amount of waste that chemical and biochemical research produces in both the forms of single use plastic and chemical waste and the numerous pressures that scientists face to capitalize on and make money from their research.

Now, I’m not saying that gross injustices and ethical violations will stop if scientists saw the need to incorporate social science and critical social justice methodologies into their research paradigms, but I do believe that scientists would be more likely to think of the implications of their methods and results within the larger context of the social-political system. While this problem is endemic of the entire system of knowledge-development in science, I think the problem of scientific research not acknowledging the larger work of humanities research and how they intersect can be traced back to how scientists are trained to be scientists. If primarily undergraduate institutions put more of a focus on building bridges between the pure science majors and the humanities majors instead of exclusively focusing on hard science, the students would be much more likely to carry this understanding of the wider world onto graduate school and the rest of the careers as scientists, hopefully eventually changing the entire research ecosystem acknowledge the greater impact of their scientific research.

America’s higher education institutions are historically built upon white supremacy and colonialism, and universities have a vested interest in maintaining their large endowments and reputation within the larger world. Regardless of the feelings and opinions of the people who are actually doing the research at the institutions, a large part of research is funded by the government to promote and further the oppressive agendas of the imperialistic state; for example millions of dollars are being pumped into research and development of the components of novel weapon systems for the military every day.

While a single researcher or lab cannot change the entire institution, I believe that if enough of the STEM academy educate themselves and their colleagues about how science is much more than just looking at imagery data and making conclusions from a graph, STEM will be able to acknowledge and take from humanities and social sciences research to enrich methodologies and be more readily held accountable for its actions and digressions.