April is Sexual Assault Awareness Month, and the Women’s Center is hosting its 6th consecutive Take Back the Night on Thursday, April 12th. Over the years, we’ve had a lot of questions about what Take Back the Night exactly is, why it looks the way it does, and how students can get involved. To help get those questions answered we started the “What You Need to Know” series focused on TBTN last year and are continuing on the tradition, so stay tuned for more posts over the next couple of weeks. This blog focuses on the evening’s campus march against sexual violence. 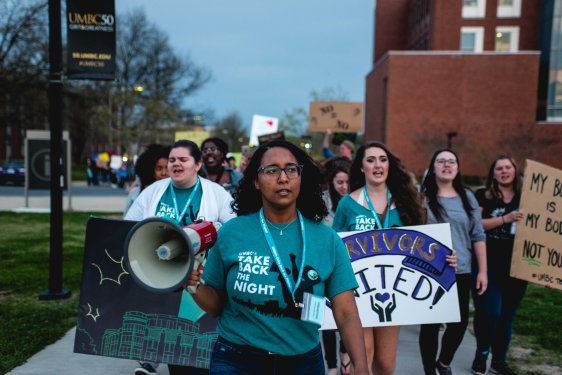 As a survivor of sexual assault, the Take Back The Night march reminds me that I’m not alone.

Mariana De Matos Medeiros, ’16, and former student staff member at the Women’s Center, said “To me, having the opportunity to speak and march at TBTN last year reminded me that I am not alone and that I can stand in my power to speak about my experience. It took me 3 years to finally speak about my assault and one of the very first times was at TBTN last year. Seeing so many gathered to support allowed me to speak and speaking has allowed me to heal.”

It can be easy to blame yourself, isolate yourself, and feel like you’re the only person struggling with your healing; However, the march lets you connect with people who support you and believe you.

Sarah Lilly, a 2016 and 2017 Take Back The Night student leader says “Marching is us showing that solidarity is a verb, and it brings me great pride to feel so supported by my local UMBC community and to see the unconditional support for everyone else in our community.”

In an open letter in her school’s newspaper, survivor and student activist, Angie Epifano, recounted the aftermath of her sexual assault, namely her experience with institutional betrayal. She ended the letter with, “Silence has the rusty taste of shame.” Due to rape culture, victim blaming, a lack of support for survivors, and more, it is understandable that many survivors do not disclose their experience and sexual assault is rarely spoke of in public.

Much like the Baltimore-based Monument Quilt is creating and demanding public space for survivors to heal, Take Back the Night demands for space in which we will not be shamed into silence. Activists like Angie, the Monument Quilt creators, and YOU during the march are creating a new culture where survivors are publicly supported, rather than publicly shamed. Come see the Monument Quilt at UMBC on Tuesday, April 17th. 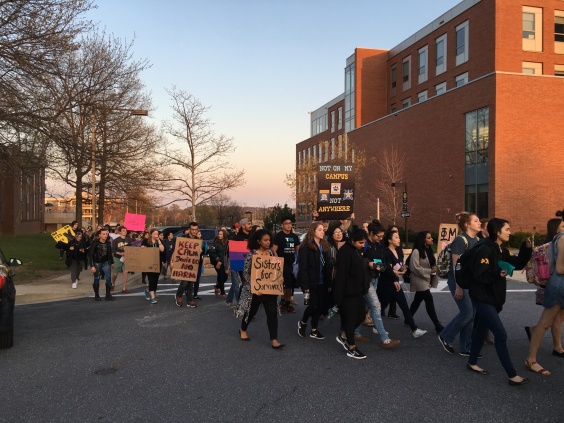 Here’s some helpful information about the campus march against sexual violence to those attending Take Back the Night at UMBC:

Stay tuned for the next installment of what you need to know about TBTN 2018!