This post was originally created by  Sydney Phillips last fall for Critical Social Justice: Rise and was posted to the Critical Social Justice blog. The Monument Quilt display was sadly rained out for CSJ, but we’re excited to host it this April for Sexual Assault Awareness Month. We’re sharing the old post with some additional details for this Tuesday’s display.

Last year, Critical Social Justice: Home was dedicated to recognizing UMBC as a home to many different people and communities. We celebrated UMBC as a home for learning, activism, and social change, as well as worked to invest ourselves in creating meaningful change here on campus. We then took our new in sights and knowledge with us to our other homes.

This year’s theme of RISE explores opportunities for building individual and collective resistance and resilience. Events throughout the week will challenge us to think about how we can do better, do more, and persist in doing it. How do we rise to meet the challenges of this particular cultural moment to work toward a vision of inclusive excellence—whether it’s in the classroom, online, or in our communities? 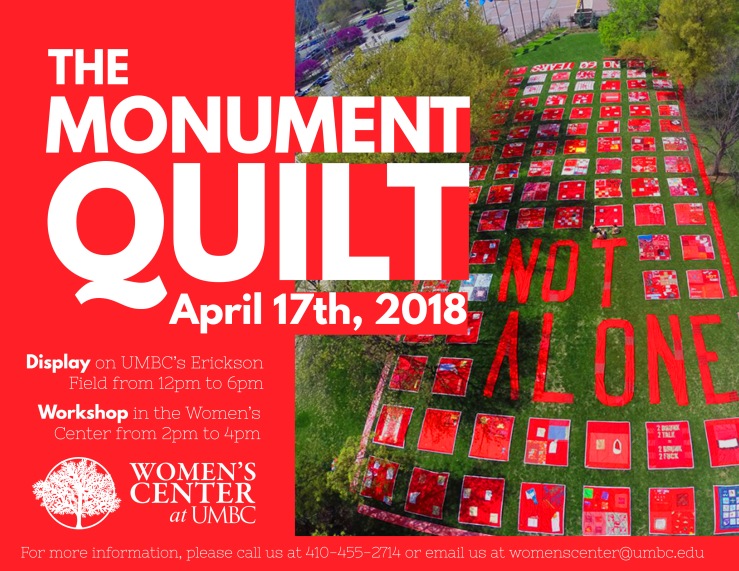 The Monument Quilt is a  crowd-sourced collection of stories from survivors of rape and abuse. The quilt is based in Baltimore but travels around the United States for displays at colleges and other events. The project will eventually conclude with a quilt display on the National Mall in Washington, D.C. spelling out “Not Alone.”

Each individual square is made of red fabric with hand-written testimonials created by survivors and allies. The goal of the quilt and the sharing of these stories is to create a public space for healing for survivors and to work towards changing how communities respond to rape.

The Monument Quilt addresses rape as a social justice issue that affects everyone and views activism as a way of healing from trauma. This project is creating a new culture where survivors are publicly supported, rather than shamed. It also deconstructs the narrow, mainstream narrative of sexual assault by letting survivors tell their own stories.

The Monument Quilt takes an intersectional lens to the issue of sexual violence and focuses on specific communities who are affected by sexual violence, including but not limited to women and people of color, LGBTQIA+ individuals, and men. In an effort to represent the community with the highest rate of sexual violence in the U.S., The Monument Quilt has partnered with many Indigenous people and tribal communities. According to the a 2015 study by the National Institute of Justice, 4 in 5 American Indian and Alaskan Native women have experienced violence in their lifetime. Native women are significantly more likely to experience violence by a non-Native partner. Of those that have experienced violence, 66.5% of women were concerned for their safety.

In 2015, The Monument Quilt joined other activists to demand justice for a 13-year-old Choctaw boy who was sexually assaulted multiple times by his supervisor, Dale Townsend, at the Dollar General where the two worked. The boy’s parents brought a suit against Dollar General in Tribal Court, and the retailer argued that because the store was not within the jurisdiction of the tribe the retailer could not be legally sued by the tribe. Dollar General v. Mississippi Band of Choctaw Indians became a much larger issue because it was not only about ensuring justice for a survivor, but about proving equitable legal power for Native American communities. This case eventually made its way to the Supreme Court where a tie allowed a lower court’s opinion in favor of the Choctaw tribe to stand.

You can earn more about The Monument Quilt and their activist efforts through the display and workshop on Tuesday, April 17th on Erickson Lawn from 12-6pm. The Women’s Center will be hosting a quilt making workshop from 5-6:30pm in the Women’s Center. Survivors and secondary survivors are invited to attend this workshop to make a quilt square that will be contributed to the Monument Quilt.

Additionally, we are excited that Tuesday’s event will include photography from Maite H. Mateo. Based in New York, Mateo documented the portraits of Latina survivors in Queens, New York who made quilt squares to be added the the Monument Quilt display. Mateo’s photography serves as visual representation that immigrant women often suffer higher rates of battering than U.S. citizens because they may come from cultures that accept domestic violence or because they have less access to legal and social services than U.S. citizens.